Healthcare under fire: Treating patients during the 2020 wildfires

As of this September, 2020 has already been declared the worst wildfire season in U.S. history, with more fires possible all the way into December. Over 4.5 million acres have been burned in California, Washington, and Oregon as of this writing.

The fires have caused billions of dollars’ worth of damage and forced more than half a million people to evacuate. Smoke from the fires was thick enough to be seen from space, turned skies red over many cities, and was blown as far east as New England.

And experts warn to expect the same in 2021 and beyond. Scientists say that wildfire seasons are going to worsen and grow longer as the world deals with climate change. Rising temperatures and droughts have made it easier for fires to start and spread. It does not take much more than lightning or a gender reveal party to start a massive blaze.

During a crisis like this, people will be relying on healthcare providers more than ever. Patients will come in suffering from physical ailments such as smoke inhalation, dehydration, or burns. They’ll come in with mental and emotional issues from watching their homes, sometimes their towns, burn down.

Hospitals and clinics need to be prepared ahead of time to deal with patient surges, unsafe conditions, and the possible need to evacuate.

Not a member? Let's fix that!

A membership to Accreditation and Quality Compliance Center provides accreditation and safety professionals with a collection of continuously updated tools, best-practice strategies, and compliance tips developed by industry experts. With two membership options, you can customize your access level depending on your education and training needs. 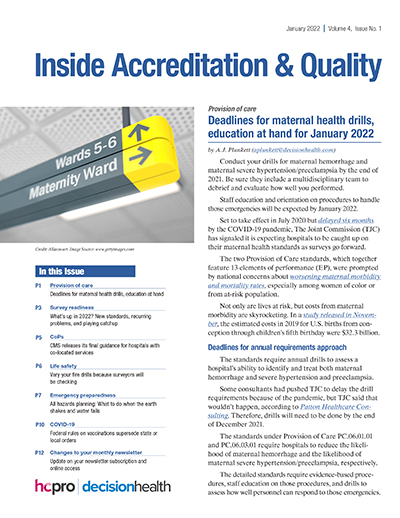